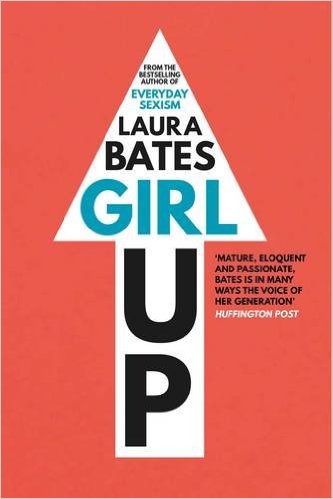 Founder of the Everyday Sexism Project, writer and all-round badass Laura Bates came to Manchester last night to talk about her new book Girl Up and what inspired her to write it in the first place.

Laura gave us an introduction to the Everyday Sexism Project and the events that started it. Being repeatedly groped and cat-called in public encouraged her to start asking women if this is something that often happened to them as well. She was met with a resounding ‘yes’ and was frustrated about being silenced when trying to address sexism, being told to stop making a fuss, stop getting your knickers in a twist, stop overreacting, because ‘women are equal now.’

She did some research into the under-representation of women in various fields, and found gender imbalance in politics, economics, art, science, architecture, journalism and film. She looked at the appalling rape and domestic violence statistics for the UK. She was sick of people refusing to even acknowledge these problems and so Everyday Sexism was born. The project documents ‘testimonies of inequality’ and Laura has used people’s experiences to work with politicians, ministers and schools to address these inequalities. The Everyday Sexism Twitter also allows people to share their experiences of sexism and the amazing ways they stand up to it.

The project has shown common themes and patterns in people’s stories and quickly highlighted that sexism is a global problem. It also sheds light on how sexism is connected to various other forms of prejudice, like homophobia, ableism, racism, ageism and transphobia. What disturbed Laura the most about the project was the amount of entries coming in from school girls putting up with sexism – being cat-called, groped and followed home by men on their way home from school, hearing degrading comments from their peers (and sometimes figures of authority) and then being told to shrug it off.

Laura has visited a lot of schools to talk about some of these issues, and has seen first-hand that the sex education on the curriculum is very much lacking. Unhappy with the information pupils are given about consent, healthy relationships, sexting and sending/receiving nudes, Laura decided to write Girl Up.

The book covers everything from body positivity, protecting yourself online and recognising misogyny in its many ugly forms, to career advice and information about consent. There’s even a Sexist Bullshit Klaxon to help readers identify when they are in fact being bullshitted, various illustrations of vaginas and colour-by-numbers genitalia (because frankly, we’re sick of seeing cocks everywhere we look). The book is a hilarious, accessible introduction to feminism for younger readers, and provides practical advice and resources for dealing with sexism. There’s tons of swearing, which is awesome too.

The discussion continued when Laura invited questions from the audience. A variety of issues were brought up, including dealing with sexist women and getting men on board with feminism (I won’t write everything here because I’ll be here til midnight). If you haven’t already read Laura’s first book Everyday Sexism then you definitely should!

You can buy Girl Up here and Everyday Sexism here.