I haven’t seen All Time Low since they headlined the Kerrang! tour in 2010 at Manchester Academy and was shocked to see a TV advert promoting their UK arena tour. When I found out Against the Current and Good Charlotte were part of the line-up, I decided I simply couldn’t miss out on this pop punk party.

Sadly, I missed Against the Current’s set and I’m truly gutted about that. However, Good Charlotte soon put me out of my misery. The Maryland five-piece started off with The Anthem, a classic song full of attitude for the misfits of the world. Everyone in the crowd was hyped and it was many people’s first time seeing Good Charlotte (including mine). A lot of their songs transported me back to early teenagehood when I first got into bands like blink-182, Yellowcard and Taking Back Sunday and was experimenting with black makeup and various hair colours.

Good Charlotte announced the end of their hiatus in November last year and haven’t toured in a while, but had no trouble performing their timeless punk hits, including Girls and Boys, I Just Wanna Live and The River. The short and sweet set ended with the infamous Lifestyles of the Rich and Famous, which had everyone singing as loud as possible and loving life. They promised to come back to the UK later this year with new material and I’ll definitely be there. 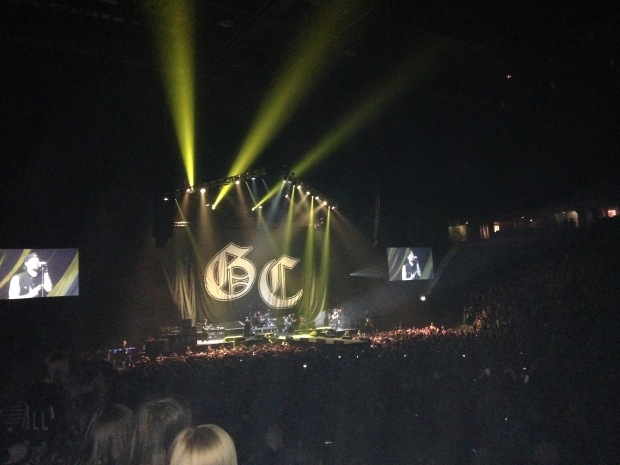 (The quality of my photos is appalling, but I’ll share them anyway.)

One of my favourite things about going to gigs is listening to the music played during intervals. The eager and excitable crowd enjoyed a feast of pop-punk bangers from Taking Back Sunday and Jimmy Eat World and more recent stuff from Panic! At the Disco and PVRIS. I love how the simple act of singing along to a great song can make thousands of strangers feel connected to each other.

Finally, All Time Low burst onto the stage to thunderous roars from the crowd. Kicking off with Kids in the Dark, they happily bounced around and made themselves at home straight away. The lads were on top form, belting out one corker after another – Love Like War, Dancing with a Wolf and Backseat Serenade had the audience warmed up in no time. We were treated to a mixture of older material from Put Up Or Shut Up (2006), So Wrong, It’s Right (2007) and Nothing Personal (2009), as well as recent songs from Future Hearts (2015). Popular and well-known tracks like Poppin’ Champagne, Dear Maria, Count Me In and Damned if I Do Ya (Damned if I Don’t) are overplayed on TV, but emanate such strong energy when performed live. 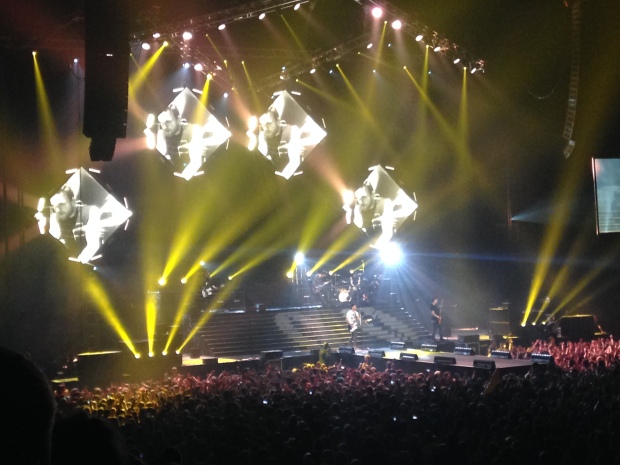 All Time Low took care to chat to the crowd between songs, keeping us entertained with their usual dick jokes, sexual innuendos and general pratting about. Guitarist Jack Barakat demonstrated his aptitude for making everything into a dirty joke and managed to turn a conversation about Taco Bell into something obscene. It was impossible to be immune to Jack’s stage presence; he was constantly dancing around like a hyperactive toddler, teasing the audience and clearly savouring the effect he had on young female fans. Alex Gaskarth is a talented frontman, as he knows exactly how to engage with the crowd and somehow makes a show feel personal even though he’s performing to thousands of people.

The pace slowed down when they relaxed into the acoustic part of the set, something that they do particularly well. An All Time Low show wouldn’t feel complete without the emotional numbers. After Good Charlotte’s Joel Madden joined in to perform Bail Me Out, Alex came to the front of the catwalk to sing his heart out and break everyone else’s hearts in the process. The atmosphere was calmer during Therapy, Tidal Waves and Missing You, but no less electric.

Returning to their energetic state, they brought the night to a close with more upbeat tracks and disappeared. Of course, they came back minutes later with an encore after deafening demands from the fans. It struck me that they didn’t rush off the stage immediately after finishing their final song; they hung around to give emphatic thank-yous and handed out drumsticks, guitar picks and water to the audience. Oh, and they sang an impromptu rendition of The Human League’s Don’t You Want Me.

All Time Low really do belong on an arena stage. Last night’s gig proved they’re fully deserving of their success because they’re bloody good at what they do.